Concealment, Mediation, and Resistance Tourism at the Mleeta Museum 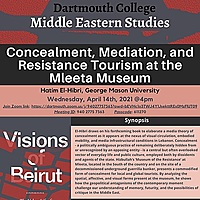 In this upcoming lecture sponsored by the Middle Eastern Program and Art History Department Professor El-Hibri will draw on his forthcoming book to elaborate a media theory of concealment as it appears at the nexus of visual circulation, embodied mobility, and media infrastructural conditions in Lebanon. Concealment - a politically ambiguous practice of remaining deliberately hidden from or unrecognized by an opposing entity - is a central but often overlooked vector of everyday life and public culture, employed both by dissidents and agents of the state. Hizbullah's 'Museum of the Resistance' at Mleeta, located in the South of the country and on the site of a decommissioned underground guerrilla bunker, presents a commodified form of concealment for local and global tourists. By analyzing the spatial, affective, and visual forms present at the museum, he shows how the geopolitical antagonisms of the contemporary moment challenge our understanding of memory, futurity, and the possibilities of critique in the Middle East.

Hatim El-Hibri is an Assistant Professor of Film and Media Studies. His research and teaching interests focus on global and transnational media, visual culture, Lebanon and the Middle East, critical theory, and the historical entanglement of media technology and institutions with the production and contestation of urban space. His first book, titled Visions of Beirut: The Urban Life of Media Infrastructure, is forthcoming from Duke University Press (2021).

Free and open to the public.

Sponsored by the Middle Eastern Program and Art History