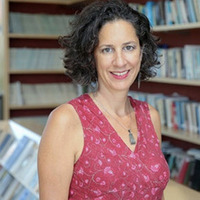 Nadje Al-Ali is Robert Family Professor of International Studies and Professor
of Anthropology and Middle East Studies. Her main research interests revolve
around feminist activism and gendered mobilization, with a focus on Iraq,
Egypt, Lebanon, Turkey and the Kurdish political movement. Her publications
include What kind of Liberation? Women and the Occupation of Iraq (2009,
University of California Press, co-authored with Nicola Pratt); Women and War
in the Middle East: Transnational Perspectives (Zed Books, 2009, co-edited with
Nicola Pratt); Iraqi Women: Untold Stories from 1948 to the Present (2007, Zed
Books), and Secularism, Gender and the State in the Middle East (Cambridge
University Press 2000. Her co-edited book with Deborah al-Najjar entitled We
are Iraqis: Aesthetics & Politics in a Time of War (Syracuse University Press)
won the 2014 Arab-American book prize for non-fiction. Professor Al-Ali is on
the advisory board of kohl: a journal of body and gender research and has been
involved in several feminist organizations and campaigns transnationally.