1972: THE EGYPTIAN STUDENT MOVEMENT AND THE POLITICS OF MEMORY

Join us virtually in commemorating the 50th anniversary of the 1972 Student Movement in Egypt. 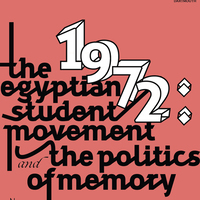 Join us virtually in commemorating the 50th anniversary of the 1972 Student Movement in Egypt. In this day-long symposium, historians, anthropologists, political scientists and literary scholars will discuss the movement's history, its national and regional impact and its persistent legacies. The 1972 Student Movement was the culmination of decades of student activism in the country. The unprecedented scale of the protests (students demonstrated and held sit-ins across the entire country not just in Cairo and Alexandria), the duration of the demonstrations, sit-ins and strikes (the entire month of January), the subsequent actions of the government to preempt any further left-leaning uprisings (e.g. their support of business-oriented neoliberal Islamist groups), and the persistent cultural legacies of those uprisings (they were invoked and celebrated during the 2011 uprisings), all underline the centrality of the events of that year to Egypt's national history. The events were led by a generation impacted by the 1967 war and attuned to the international student movements of 1968. Participants will address such issues as periodization in narratives of the modern Egyptian state; the "afterlives" of defeated uprisings; the suppressed emancipatory potentials of that moment; and the politics of memory.

Please register for this event